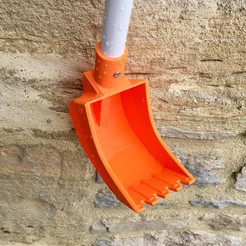 I was intrigued by this excavator-like shovel and wanted to print one for a little boy which is a huge fan of anything construction.
He loves it very much and it is now his favorite tool.

The first print (as depicted) I placed on the backside as proposed in some other make, but this was apparently the wrong backside, as it lead to having the printing lines along the shaft socket and appeared also to have unfavourable effects on the general stability of the shovel.
As I wanted to stick a wooden shaft into the socket it cracked open and I had to stabilize it with the two cable ties as seen in the photograph.
Then, shortly after I gave it to said little boy for his construction play, but it took only 30 minutes until he smashed it onto some rocks which caused it to shatter into pieces.

Well, for the second print I used this rather smallish diagonal face on the backside and this lead to a better print. This current version is now still in use, but has to prove its worth in a sandbox yet.

In general I like the design very much, as it is a beautiful rendition of an excavator bucket. From what I saw until now it could have been designed a tiny bit sturdier however. 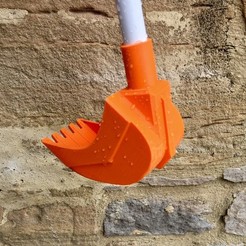