If you are wondering again what is the purpose of 3D printing, this article will give you ideas ! Here is a selection of 15 models of lamps that can be made with a ** personal 3D printer * . This goes from the lampshade * for the real handymen to the very design objects for the deco fans. The creation of lamps is one of the favorite applications of the maker community. These designs are customizable * objects that will help you see things more clearly in the dark. These 3D * files are free or premium and you can download them all on Cults.

This beautiful lamp was inspired by the most famous monument of Paris , the Eiffel Tower . Designed and manufactured by Samuel N. Bernier , a Canadian industrial designer, this model can be easily made using a classic ** desktop 3D printer. It is printed in several pieces however, so some assembly time is required. Designer: leFabShop

The low-poly Lump is a pretty endearing shade. It's pretty minimalist but it's also incredibly easy to make with a 3D printer. You will not need supports or rafts , so there is no fuss. Make a series of them in any color you like, and you'll instantly update all the fixtures in your home. Designer: Cusco studio

Another lamp made by Samuel N. Bernier and his team at the FabShop. The shape of the Zuzanna lamp resembles the delicate folds of a sheet of paper and can be used either as a suspension or as a table lamp . It was specifically designed to be printed on a Zortrax M200 to take advantage of its ABS printing capacity and its 200 x 200 x 185 mm volume . But you can try to build it on an equivalent 3D printer too. Designer: leFabShop

The lampshade Lampion is a high-end design . On sale at 15 euros, it consists of two separate parts modeled on a simple hexagonal grid . Depending on your personal style, you can either use the parts separately or stack them on top of each other. It can be cool, for example, if you print the "web" with a different color. Designer: Voood

Award-winning designer Martin Žampach has created Ribone Cross One , a striking design of intersecting lines. Combine this lamp with a light mixer and it will release an optical illusion according to the pulsations when the lights will be on. This high-end design sells for 10 euros. Designer: Martin Žampach ****

The pumpkin lamp, aka "The Pumpkin of Omar ", is a decorative element that may be best suited for the Halloween season (unless you are one of those people with a pale complexion, for whom Halloween is all over the place. 'year). Print several and match them with green cables to complete the resemblance to the cucurbitaceous . Designer: leFabShop

Inspired by another vegetable , this time, the leaves of an artichoke ; this beautiful lamp in nuance would make a beautiful decoration for the home or office. You can use a standard hanging light cord and a low temperature bulb . Designer: gCreate

The SMF.01 is an elegant floor lamp assembled from 3D printable components as well as wood strips and a bead of light for a socket bulb . The STL files are downloadable for 6 euros, and you will have to provide the rest of the components yourself. It's a nice idea to make your own furniture . In fact, that's exactly what SMF stands for - Self Made Furniture . Designer: UAU Project

The Valeria lamp is a very sophisticated design. It will be perfect for Ron Burgundy's library , with its mahogany shelves filled with leather books . The small dimensions of the Valeria make it more useful as a bedside table . The object is easy to assemble and print. Designer: * Helder Santos **

This lighting emits a reassuring , warm glow , perfect for keeping nightmares out of a room. And look at his little brother, the Spot Light , if you prefer some disco shades to mix with your interior lighting . Designer: Thomas Raygasse

Like the Lump, the Iceberg is a DIY shade with a low-poly design, this item is visually more ambitious. His angles have mutated and grown to a daunting size. It should still be relatively easy to print, however. The Iceberg is a high-end design that sells for 15 euros. Designer: Voood

This lamp is really a romantic work done by designer Gordon LaPlante . He realized this lamp "for my love and the co-founder of gCreate, Anna Lee". The light looks like a flower in suspension and the light illuminates evenly across the room, while providing enough light in the bottom of the light **. Designer: gCreate

Another lamp by the designer Helder Santos - this time offered under the auspices of EUMAKERS - which gives another strong atmosphere to the Ron Burgundy . Reasonably certain that Mr. Santos is a fan of " Anchorman " movies ... and there is absolutely no shame in that! Designer: EUMAKERS

The Ribone draws its inspiration from the visual aesthetics of heat sinks that can be seen on industrial lamps or LED bulbs. This high-end model sells for 10 euros. Designer: Martin Zampach

According to its designer, the LUX lamp "celebrates the light in the darkest period of the year, the winter ." It was designed and printed during the Lux Helsinki Light Festival in January of this year. This truly remarkable 3D design is a top model and can be yours for only 1 euro. Designer: Pekka Salokannel

The stool printed in 3D

Discover this amazing stool printed in 3D and perfectly functional! It was made by Adafruit who used 3D printing. 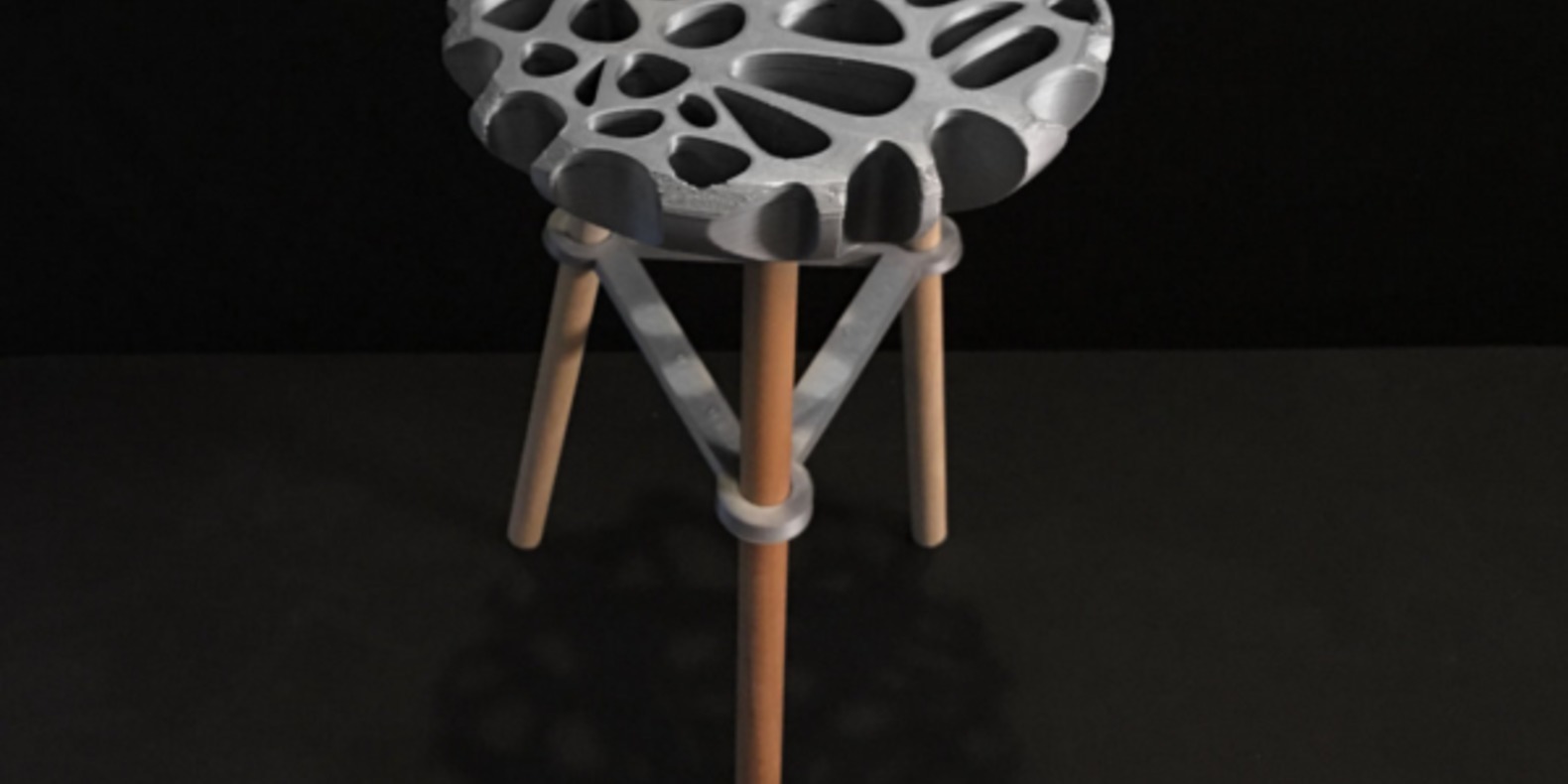 Duc Tran, the creator of the FORMBYTE studio has created beautiful pencil pots. These two storage compartments for office are decorated with inspirational quotes. 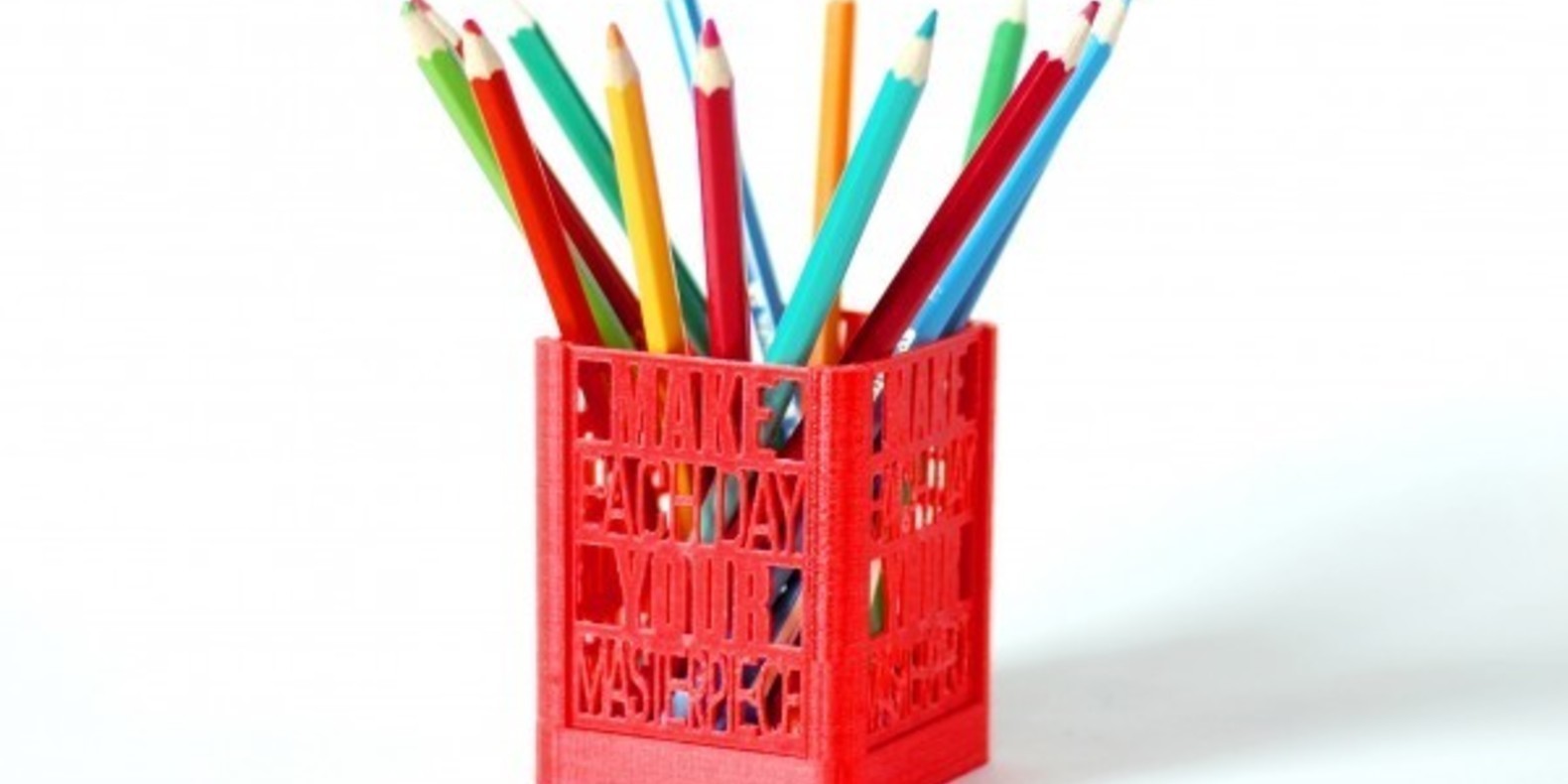