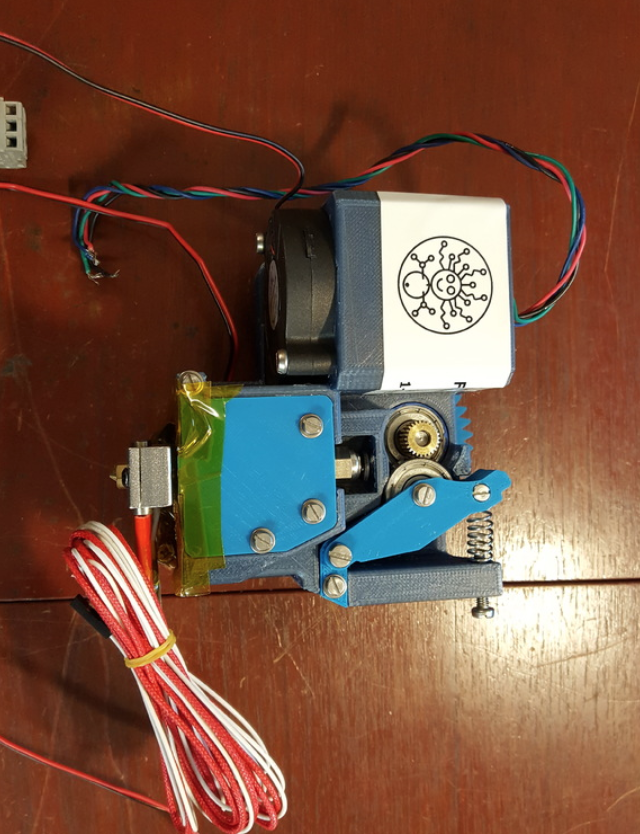 For a new printer I needed an extruder setup.

Because I print with ABS a lot this one is designed to do just that (but it also works with other filaments).
With ABS printing you do not want to have airflow passing the printed parts.
Therefor the air is inhaled from above. Then passed through to the Hot-end and then back out at the top. The same airflow construction is also made for de motor. This way the printed part never gets cooled by these 2 fans. For the dimensions of these snail house fans, see picture.

Also I wanted an extruder on which changing filament is easy. On most extruders you can’t see the filament wire and that can make it hard to change filament. If you run out of filament due the print, you are in big trouble. Therefor I made this one in such a way that you can always see the filament wire.

Because I have 3 different sizes of Filament (1.75mm, 2.85mm & 3mm) this extruder can use them all.
To do this I have made an exchangeable filament wire gide. For the 1.75 mm filament I also need to put in a Teflon tube because the hot-end is made for 3mm wire. (I can recommend the Teflon tube anyways because the filament go’s in much smoother). The filament gide is also adjustable so you can gide you filament perfectly. In the photos you do not see this gide because that is still the proto type. On that model the 3mm gide is fixed to the body. Not so smart, because you can’t adjust anything anymore. Also I broke it :-) . As a lose part you can just print it out again. The gide is mounted using a washer, M3 nut and 10mm bolt.

The little filament driver (11mm diameter) is mounted on an M8x50mm bolt I had lying around. On the lathe I turned the end of this M8 bolt down to 5mm so the driver can be mounted on it. See pictures.

The Hot-end is a cheap Chinese one I do not even know the name of, but it works very good. For the dimensions of this Hot-end see pictures.

After assembly it is wise to put katon tape on the bottom to protect the plastic from all the heat.
This way the plastic holds longer

Hi! I started my own website now. All new models I make will be posted there first from now on. I may post some in the future, but only when I have time. To see all my new work, go to: https://www.designuitinspiratie.nl/. Yes it's in dutch, but you can set it to the language you want. It's on the top right corner of every page :-). With the exception of payment models. If I have new ones, I will still offer them here :-)

You can support me : PayPal.me/jobsmolders