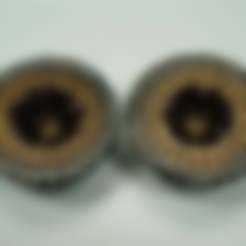 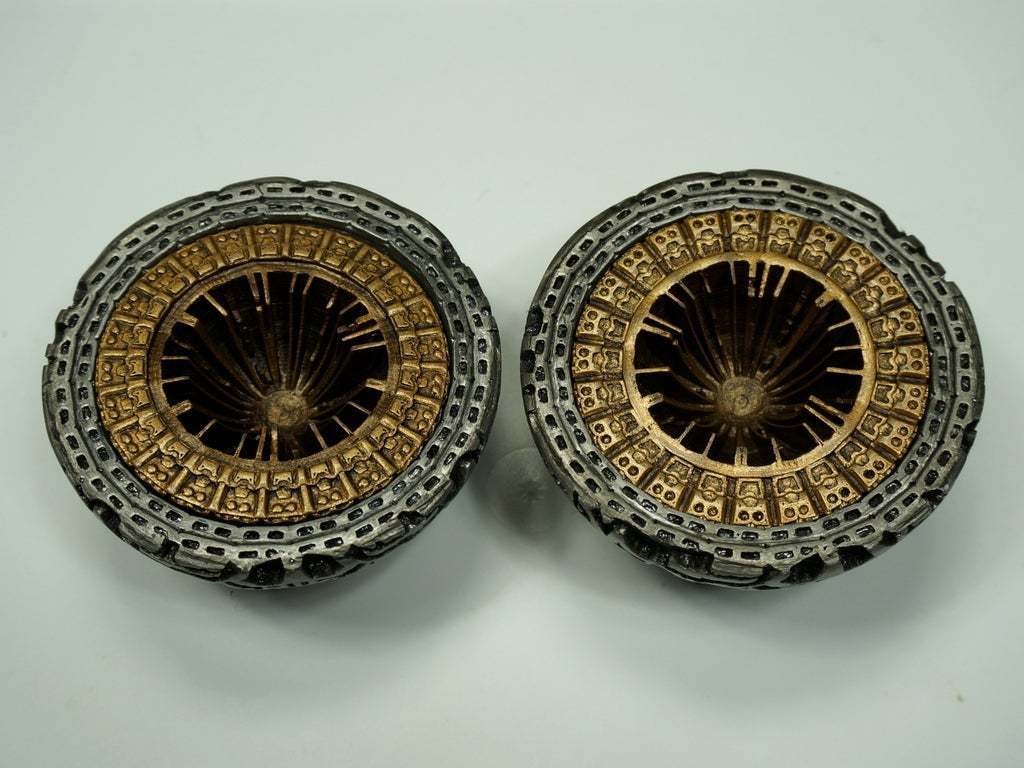 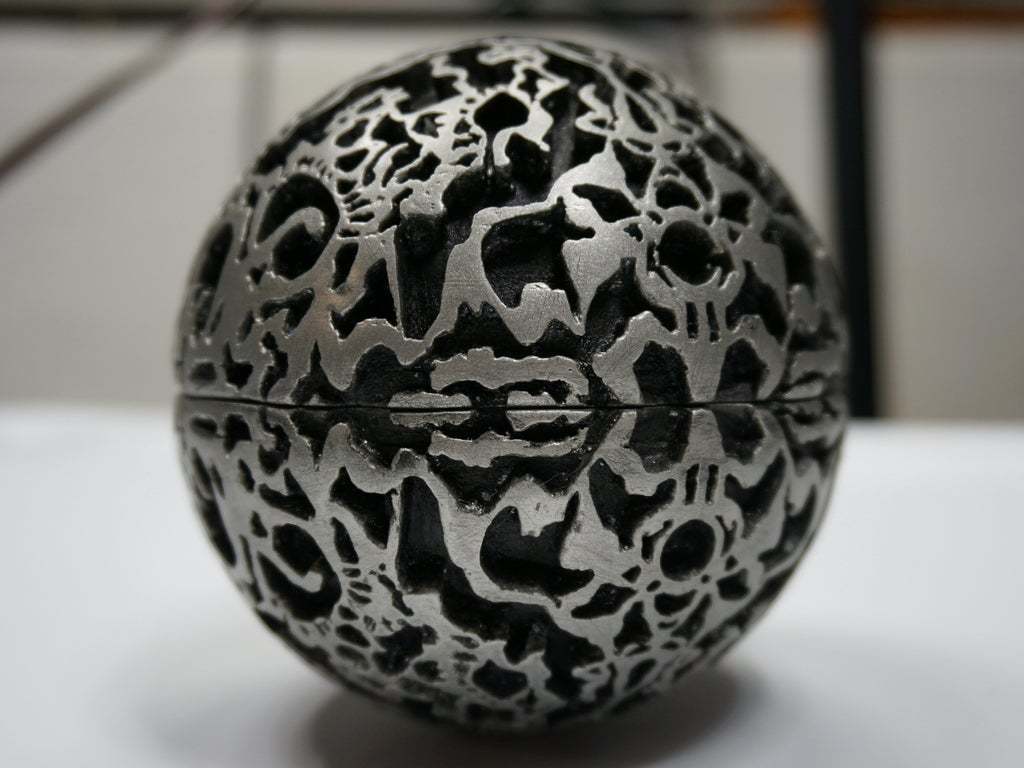 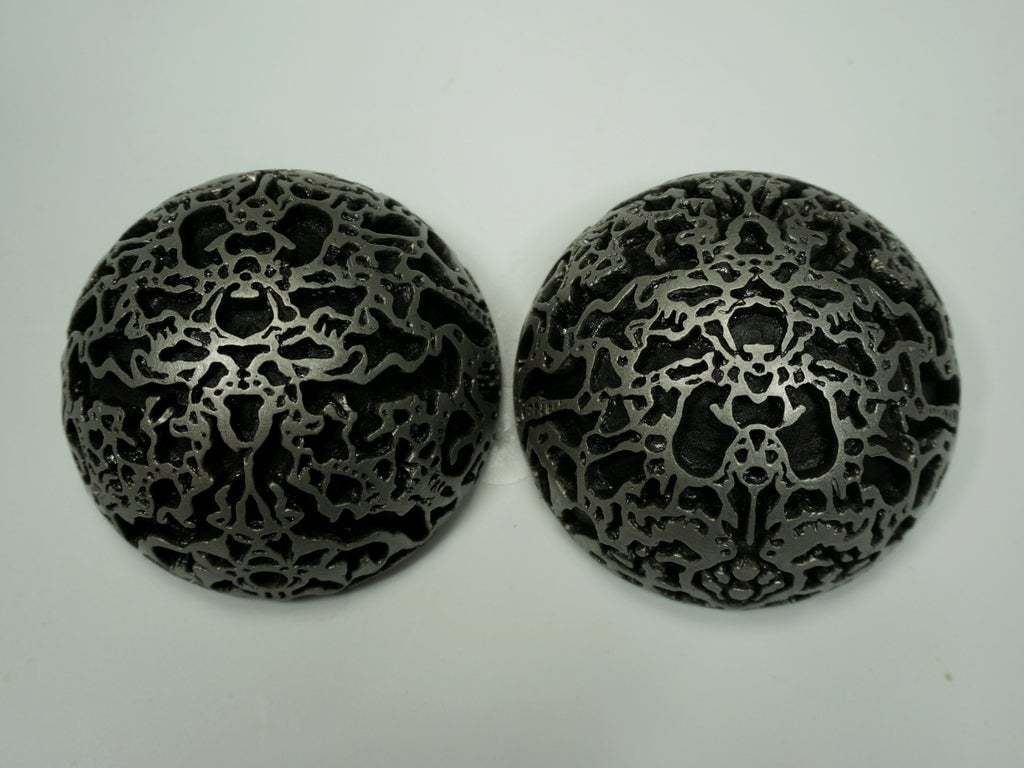 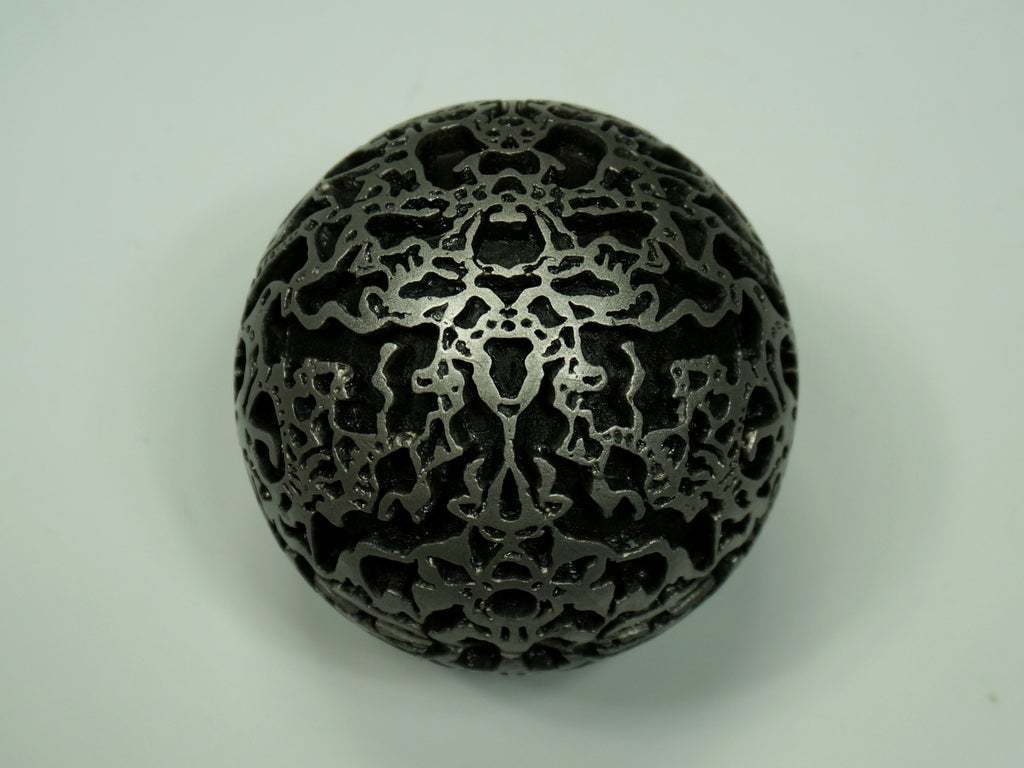 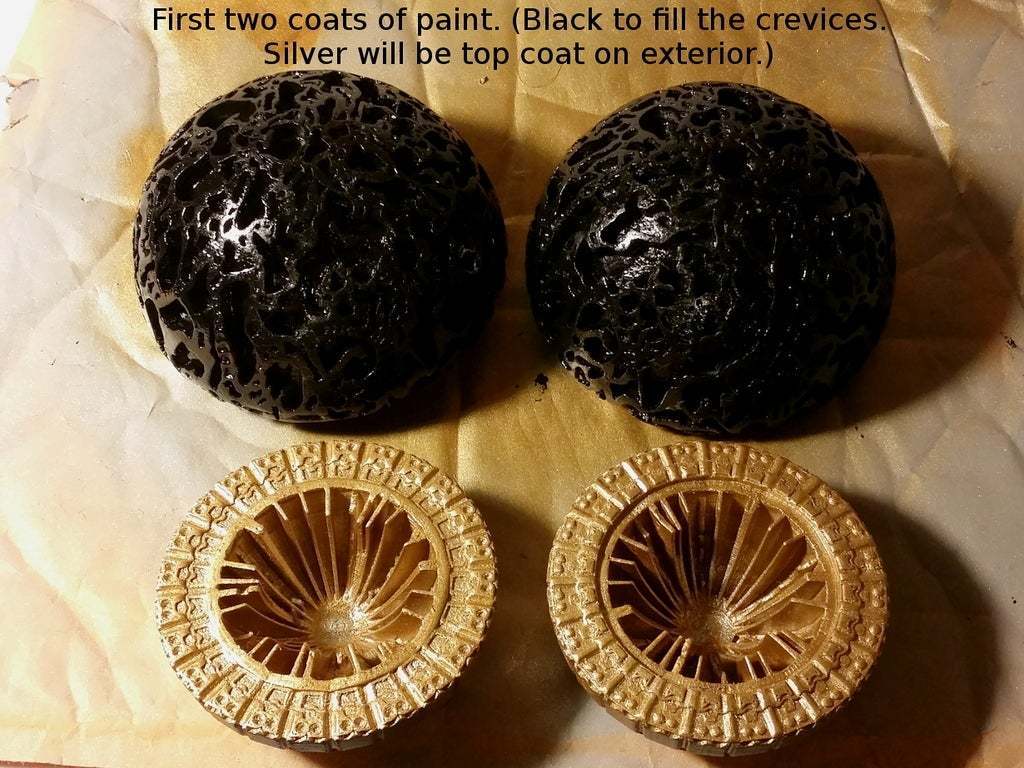 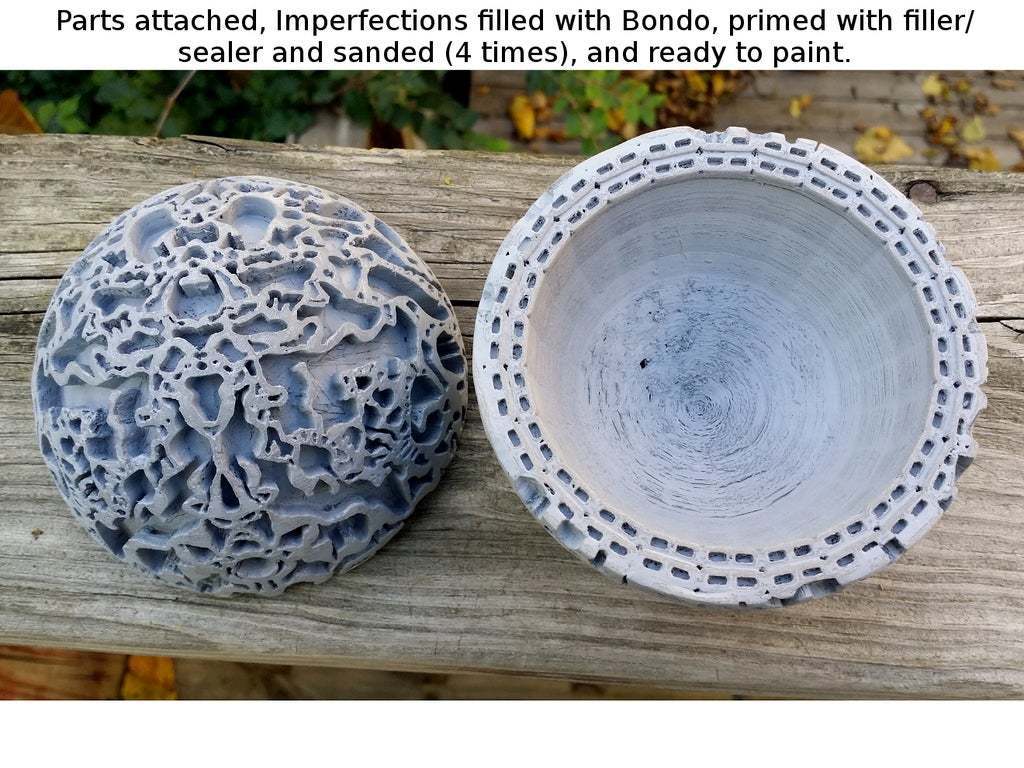 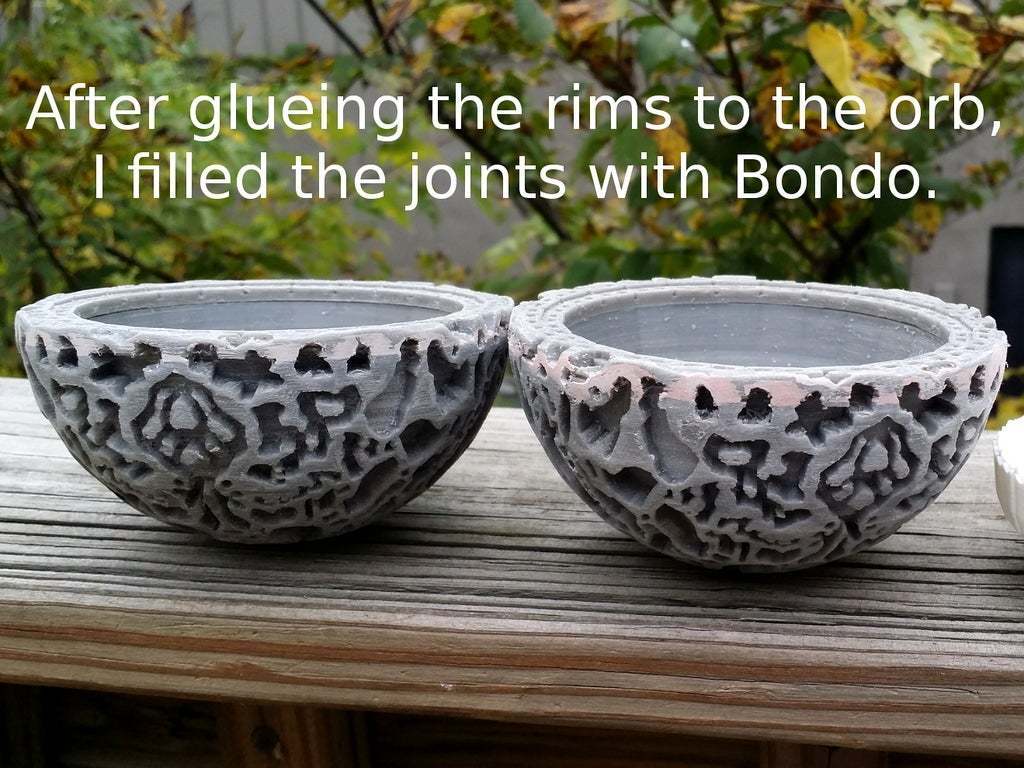 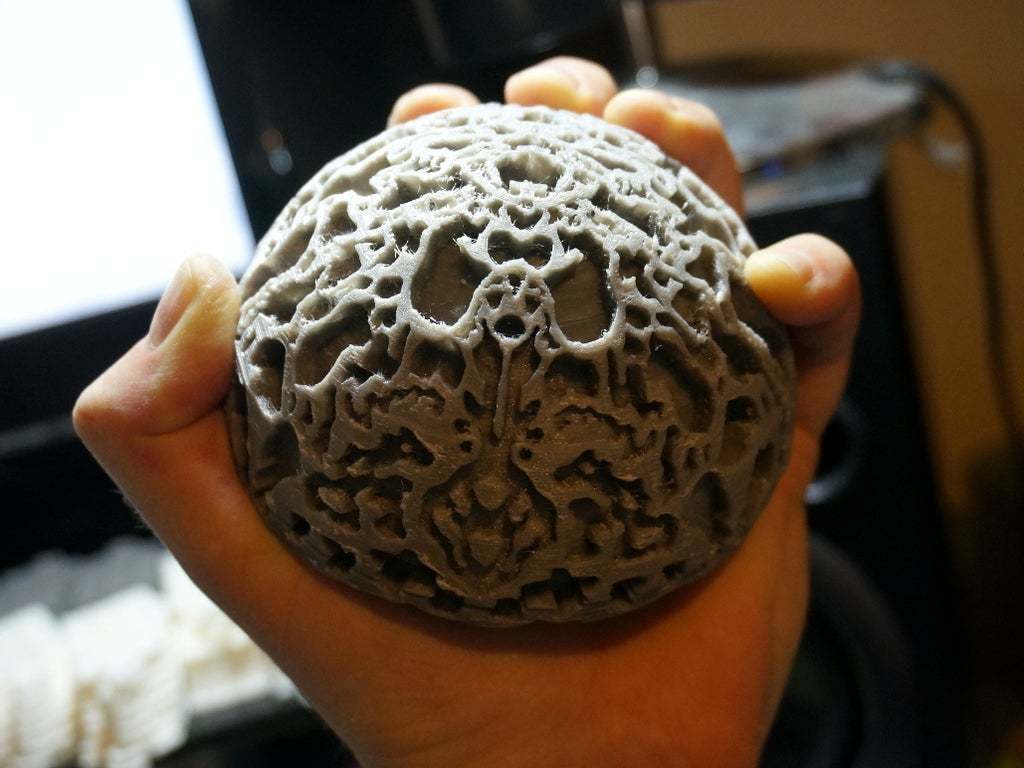 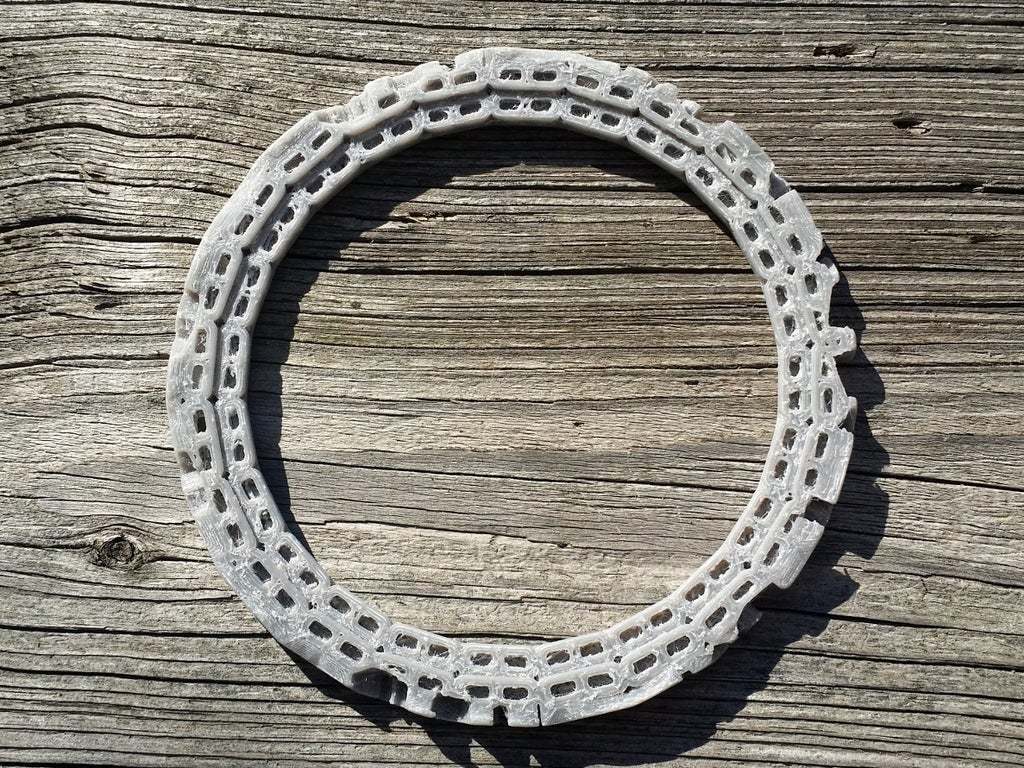 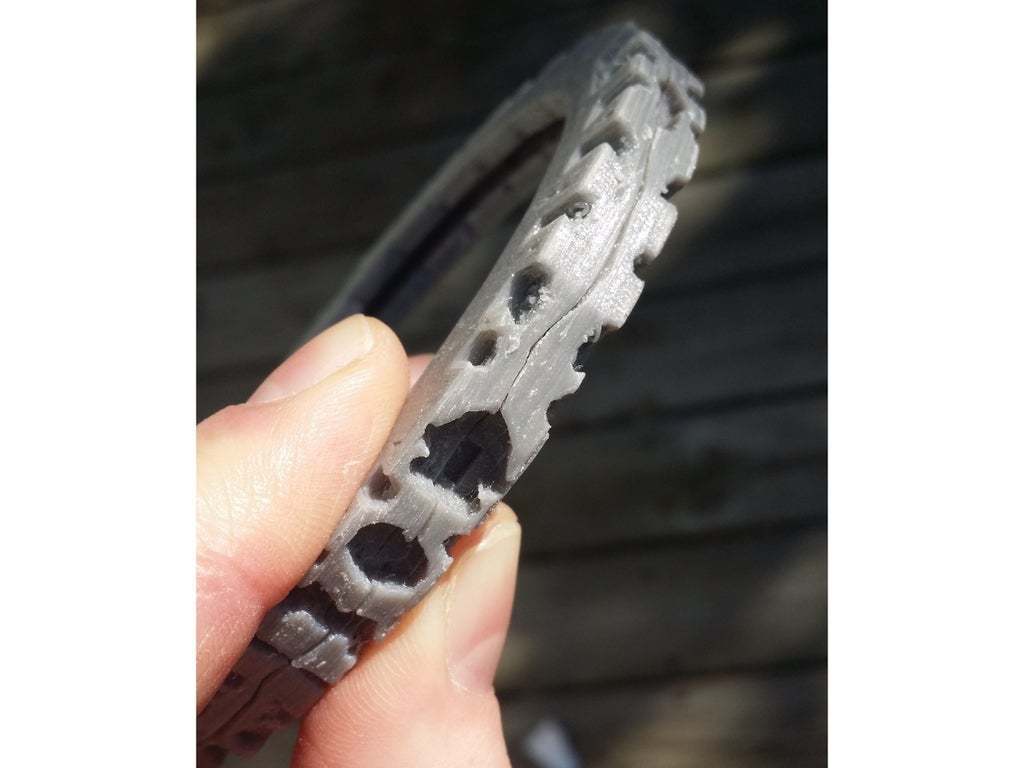 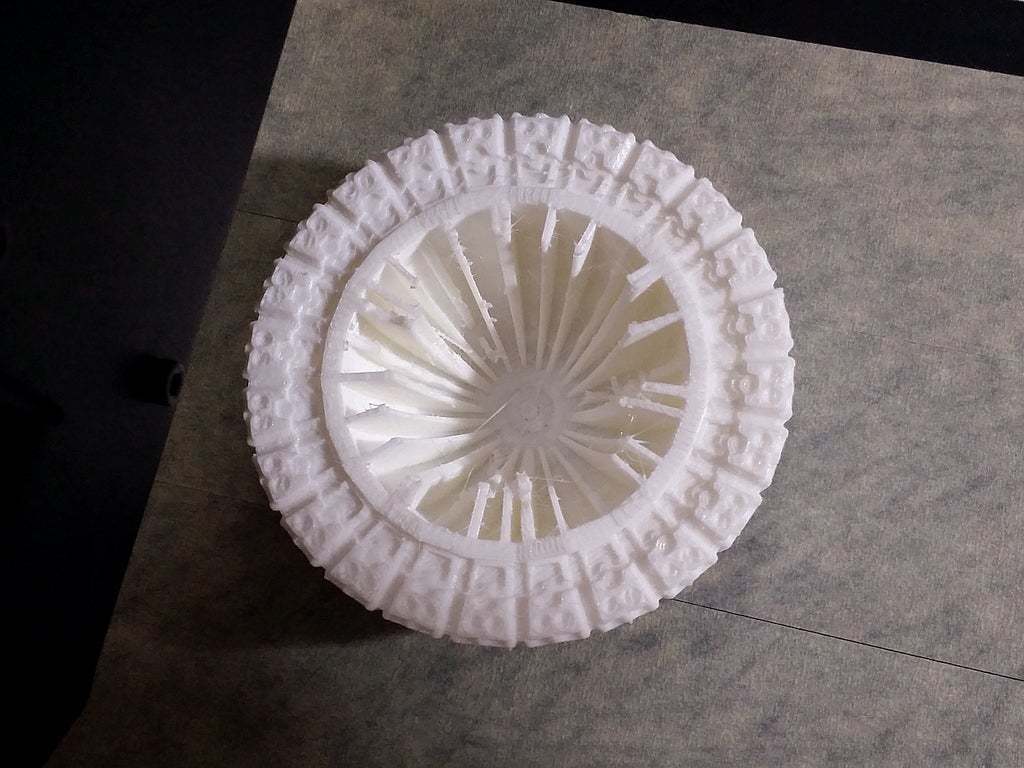 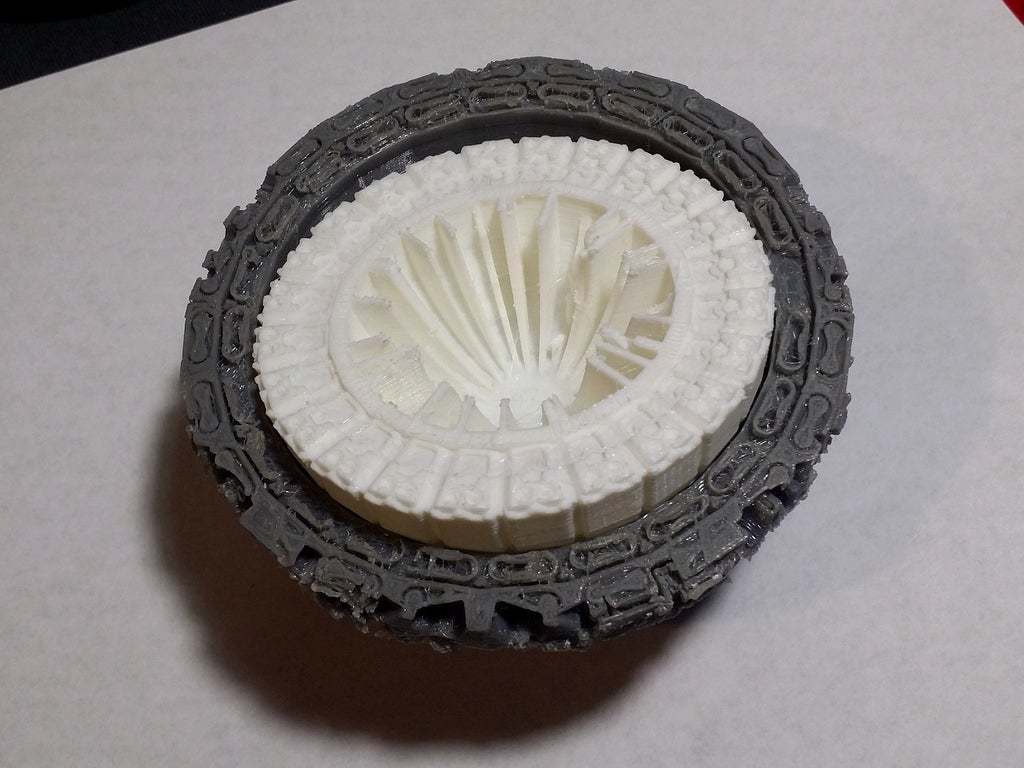 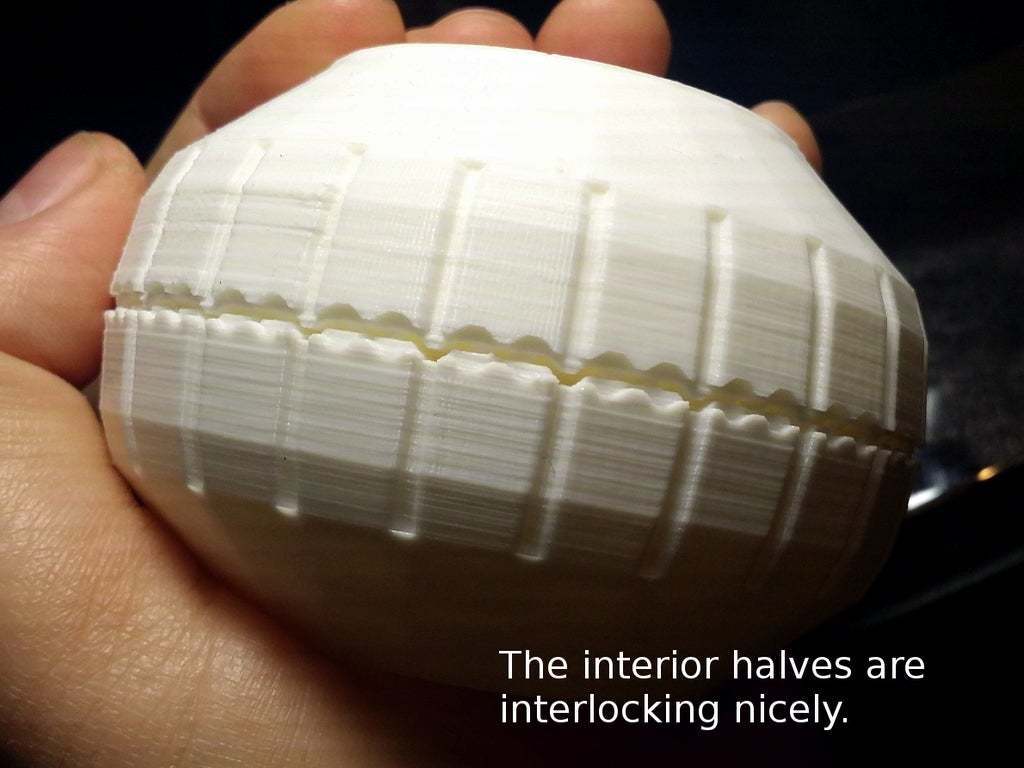 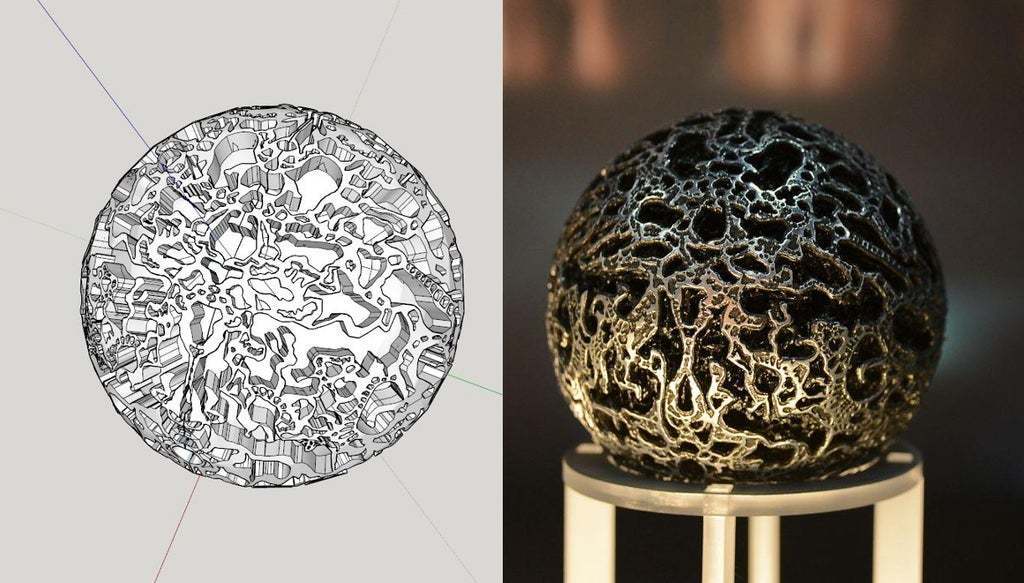 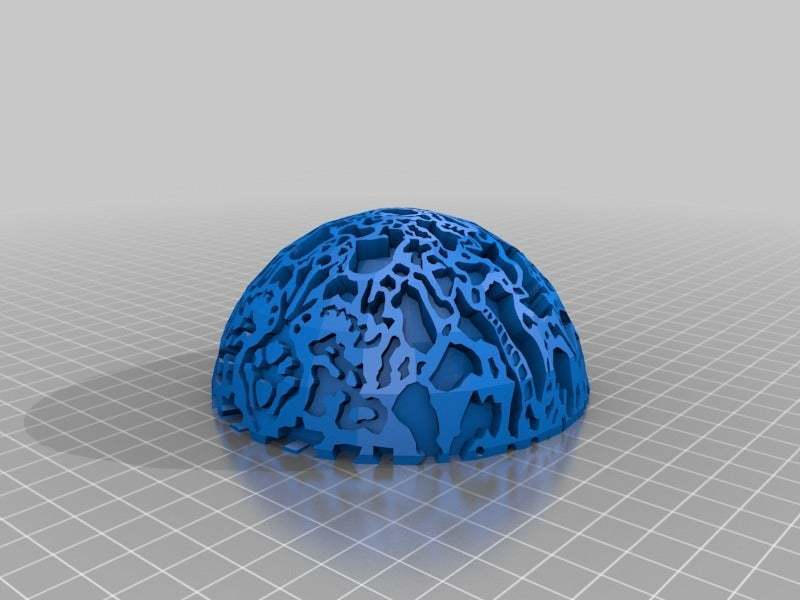 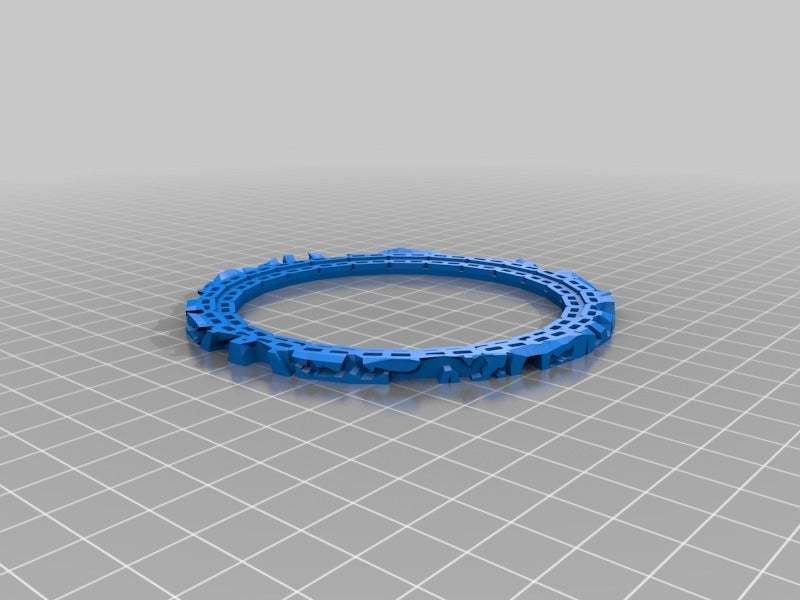 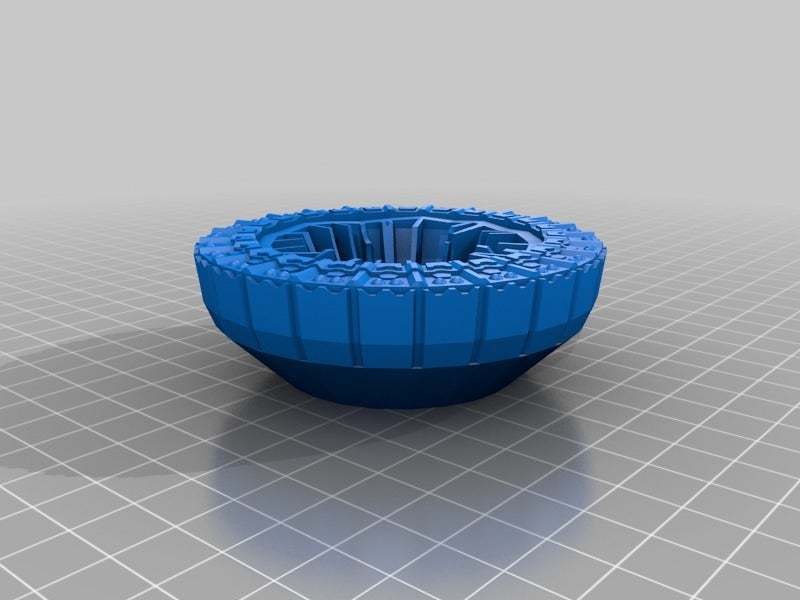 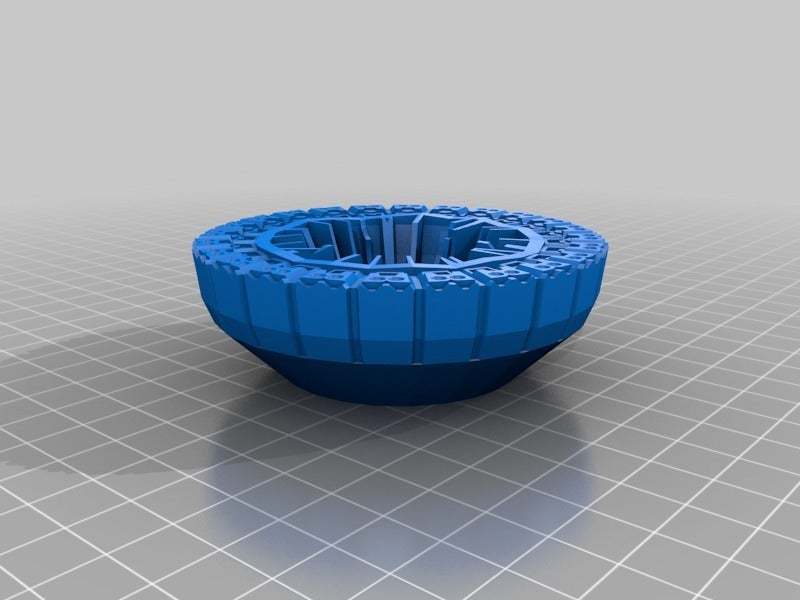 I'm nearly finished with my orb! I added pictures of the (near) final paint job. Last thing I need to do is make a few minor improvements to the stl files, then I'll replace all these updates with detailed instructions.

I have my rims and my orbs glued together, Bondo-ed, primed with filler sealer and sanded (4 times), and just about ready to paint with the final colors. There will be a few additional changes to the .stl files, including hidden mounting holes for magnets and a few more thickenings of thin edges. But we're getting close!

I updated ExteriorNew.stl in order to make some of the thin walls thicker and fix a few things here and there. I'm printing it out now. If all goes well, I'm hoping it will be the final draft.

The printing of the new exterior is complete, and it looks great at .1mm layer height, .4mm nozzle, 13 percent infill, and no supports. It took about 20 hours to print (one half sphere, that is.) See first picture.

I'm about 3/4 through with printing the new exterior, which is enough to say that it is printing without supports VERY WELL. If anyone was holding off until that was confirmed, you are clear to start printing.

I removed the old version of the exterior so as not to cause confusion.

I uploaded a new version of ExteriorNEW that gets rid of the support tower. In order to make the dome print without support structures, I made the upper interior conical with a slightly-less steep overhang than the sphere. Print at your own risk. I'll let you know in 18 hours if it works.

I tried printing the ExteriorNEW last night. When I woke up this morning, I found that the support column broke, which caused the plastic to block the path and stagger the resulting layers. So now I'm working on a slightly thicker support column.

Ok, I finally finished the new exterior! In order to make it easier to print without supports, it is in two files: "GuardiansGalaxyInfinityOrbExteriorNEW" and "GuardiansGalaxyInfinityOrbRim." Print ExteriorNEW without support structures. I included a support column inside the orb as a part of the print. Break it off when ExteriorNEW is finished printing. I recommend using support structures on OrbRim. At any rate, print each and glue together to form one-half of an orb. Then print both again to form the other half.

These two files are hot off the press, so I can't guarantee they will print flawlessly. I printed the rims, and they align nicely. I'm printing the ExteriorNew as I write this. 16 more hours to go in an 18 hour print! I'm leaving the old version of the exterior up for now in case the new version gives anyone trouble. That being said, if you print ExteriorNEW and OrbRim, you WON'T need to print the old file called GuardiansGalaxyInfinityOrbExterior.

Here's my attempt at replicating the Infinity Orb from the film Guardians of the Galaxy. It's a work-in-progress. So far I've completed the outer shell (second draft), the rim (first draft), and both halves of the interior (final draft).

In one of the pictures, you can see a side by side comparison of my orb and the orb from the film. I tried to replicate all the hole shapes to the best of my ability.

UPDATE: 09-20-2014. A user was having trouble printing the interior because of the bottom later being two separate pieces. I added some planks connecting the two pieces. Hopefully this will fix the problem. I'm STILL working on an updated exterior. It's taking me longer than expected. I hope to have it up sometime next week.

UPDATE: 08-31-2014. I was able to successfully print the interior. It fits nicely inside the exterior. I made slight modifications to the Side A and Side B files, in order to fix a few things. The new versions are now uploaded. I'm making progress on the new version of the exterior, which I'll post soon.

UPDATE: 8-28-2114. "Interior Side A" is now slicing correctly. It's going to show it's not manifold, but you can ignore this. I already ran this (and all my STLs) through Netfabb. Print the interior WITHOUT support structures.

UPDATE: 8-27-2014. I uploaded Interior Side A, the first of two interior halfs. It's designed to fit in the exterior with just enough lip for you to glue it in purposefully tilted on the axis. I designed it so that you don't need to use support structures. I don't recommend printing this part just yet, as there are some slicing errors. I'll let you know when I get it repaired.

UPDATE: 8-18-2014. 18 hours after beginning the print, I have half an orb! The support structures are proving to be extremely difficult to remove, but it did actually print correctly.

UPDATE: 8-18-2014. I uploaded a new version. The file is still not manifold, however, it does actually slice correctly now. It's printing now. Estimated time for 1/2 of the sphere is 15 hours!

UPDATE: 08-16-2014 . The current stl WILL NOT print correctly. I'll try to fix it and get a working version uploaded sometime tomorrow. Before I uploaded this file, I ran it through Netfabb and made sure it was manifold. It checked out as manifold in Repetier V1.0.0. Then I updated to Repetier Host V1.0.1. and went to print. Now it's not manifold. 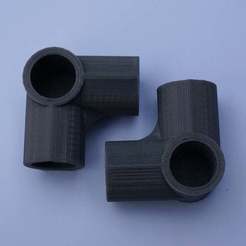 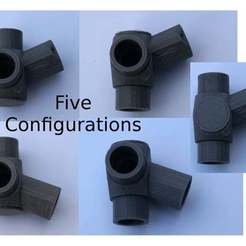 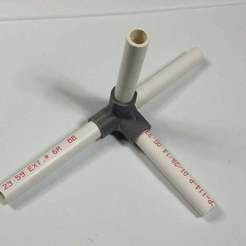 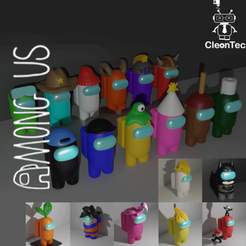