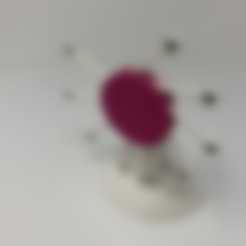 "Perpetual Motion da Vinci Style III" is the third "perpetual motion machine" in my series of Mr. da Vinci's "overbalanced wheel" models, the latest two designed for a classroom environment. I was asked to create these two new additions (plus a few more) in order to inspire classroom discussion of Mr. da Vinci's work, and was excited to convert his two dimensional designs into these stylized three dimensional models for the classroom!

As in my previous version "Perpetual Motion Davinci Style II", "perpetual motion" begins when the model is tilted backwards causing a magnet to activate a reed switch which in turn activates a motor that turns the overbalanced wheel via a rubber band transmission. And "perpetual motion" ends when either the battery expires, the rubber band breaks, the motor gives out, or by simply tilting the model forward and tapping on the back near the reed switch to disengage the magnet. In other words, it's still just an illusion.

As usual, I probably forgot a file or two or who knows what else, so if you have any questions, please do not hesitate to ask as I do make plenty of mistakes. Designed using Autodesk Fusion 360, sliced using Cura 4.0, and printed in PLA on an Ultimaker 2+ Extended and an Ultimaker 3 Extended.

Purchase, Print and Prepare the Parts.

I purchased the following parts:

I printed the following parts at .15mm layer height and 20% infill.

The remaining parts do not require brims or supports.

Prior to assembly, I test fit and trimmed, filed, sanded, etc. all parts as necessary for smooth movement of moving surfaces, and tight fit for non moving surfaces. Depending on the colors you chose, your printer model and your printer settings, more or less trimming, filing and/or sanding may be required. I carefully filed all edges that contacted the build plate to make absolutely certain that all build plate "ooze" was removed and that all edges are smooth. I used small jewelers files and plenty of patience to perform this step. The model uses 8mm by 1.25 threaded components, so a tap and die set may be required to clean the threaded parts.

To prepare the electronics, I performed the following steps:

1) Using a rubber mallet, I pressed two 8mm ball bearings (one each) into the two sockets in one "Arm.stl".
2) Once installed, I tested each ball bearing to make sure it pivoted freely in its socket.
3) I repeated this process for the remaining nine arms.
4) I then positioned the arm assemblies into the dimples of "Wheel, Outer.stl".
5) Finally, I secured "Wheel, Inner.stl" onto the outer wheel assembly using a rubber mallet and a 13mm deep socket.

For final assembly of the model, I performed the following steps:

And that's how I printed and assembled "Perpetual Motionda Vinci Style III".