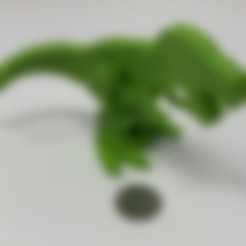 Anyway, "Motorized, Articulated T Rex(ish) Pin Walker" is yet another pin walker design, this time featuring an articulated T Rex styled body that swings from side to side as the model walks along. And while paleontologists around the world will tell you this model does not accurately represent the walking motion of T Rex, I'm old enough to have actually seen one, and yes it does..., uhh, ok, well no I'm not and no it doesn't, but it was fun designing this model anyway.

The model is designed to swing the articulated T Rex body ("Body.stl") at +- 8 degrees with a rotational a velocity sufficient enough to cause full swing articulation of the 3D printed in place body.

As usual, I probably forgot a file or two or who knows what else, so if you have any questions, please do not hesitate to ask as I do make plenty of mistakes.

One final note, I receive no compensation in any form for the design, equipment, parts and/or materials used in this model.

Purchase, Print and Prepare the Parts

You will also need a suitable battery charger.

This is a high precision print (see photograph of "Body.stl" at about 1/3 through the 3D printing process) and assembly using at times very small precision 3D printed parts in very tight spaces. Prior to assembly, test fit and trim, file, sand, etc. all parts as necessary for smooth movement of moving surfaces, and tight fit for non moving surfaces. Depending on you printer, your printer settings and the colors you chose, more or less trimming, filing and/or sanding may be required. Carefully file all edges that contacted the build plate to make absolutely certain that all build plate "ooze" is removed and that all edges are smooth. I used small jewelers files and plenty of patience to perform this step.

The model also uses threaded assembly, so I used a tap and die set (6mm by 1) for thread cleaning.

I used light machine oil for lubrication of the gears and axles.

To wire the the motor, switch and JST connector, I performed the following steps:

With wiring complete, I pressed the motor into the motor mount on "Base.stl" such that 3mm of the motor shaft extended above the motor gear plate.

Add the Gears, Cams and Axle.

There are two holes on the top sides of the body assembly, one large, and one small. The larger hole is the model right side which will be useful in assembly the model components in this step and the steps that follow.

To add the gears, cams and axle, I performed the following steps:

To add the pins, I performed the following steps:

• Positioned one "Pin.stl" into the pin slot in the base assembly such that the seesaw • driving pin faced forward.

• Slid the pin ring over the cam.
• Secured the pin in place with one "Axle, Leg.stl".
• I repeated this steps for the remaining pin and leg axle.

Add the Seesaw and Body Mounts.

To add the seesaw and body mounts, I performed the following steps:

For final assembly, I performed the following steps:

And that is how I printed and assembled Motorized, Articulated T Rex(ish) Pin Walker. 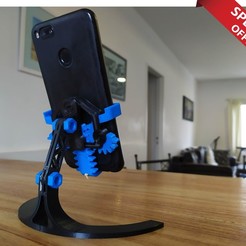