The Athena Parthenos at The Louvre, Paris 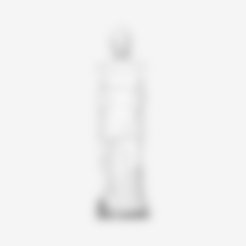 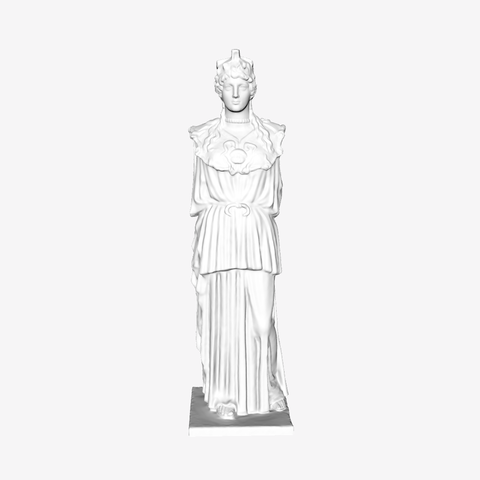 This colossal statue is one of a large series of Roman replicas inspired by the work of the Athenian sculptor Phidias (active 460-435 BC). The statuary type, derived from that of the Athena Parthenos, is probably a reproduction of the bronze Athena Promachos of the Acropolis in Athens or the Athena Areia of Plataea. The technique involving several parts used by the copyist - probably intended to imitate the original acrolith - supports the latter hypothesis.

The Ingres Minerva
The imposing Ingres Minerva stood in the gardens of the Villa Medici in Rome when the French painter Ingres, then director of the Académie de France in Rome, decided to send it to France. It entered the Louvre in 1913 after spending several years at the École des Beaux-Arts in Paris. The statue is one of a large series of Roman replicas inspired by a Greek original produced in the fifth century BC. The head and arms were added - as shown by the recesses for fitting probably aimed at imitating the acrolith technique of the original. The extremities of the body were carved separately in a different material. Athena can be recognized by the aegis draped over her shoulders: the skin of the goat Amalthaea decorated with the head of the Gorgon Medusa and formerly edged with metal snakes. The goddess probably wore an Attic helmet with a triple plume and bore attributes symbolizing the greatness of Athens and the power of its tutelary deity.

An echo of Phidias' classicism
The work is a faithful transcription of Phidias' art and the classicism that developed in the second half of the fifth century BC in the wake of the Athenian sculptor (active 470-435 BC). The pose of the goddess, the harmony of the balance, and the treatment of the drapery are imprinted with the aesthetics of the Parthenon sculptures. Athena is dressed in a similar way, with a chiton, a peplos, and a cloak thrown negligently over her left shoulder. The artist played on the contrasts between the different fabrics. The movement of the right leg reveals the fine drapery of the chiton, while the deep folds of the peplos show the rigidity of the leg carrying the weight of the figure like the fluting of a column.

The replica of a sculpture of Athena by Phidias
Although everybody agrees that Phidias carved the original, the name of the piece is still controversial. The statuary type reproduced in the Ingres Minerva seems to be a variant of replicas of the Athena Parthenos, a masterpiece in gold and ivory made by Phidias circa 440 BC and placed in the Parthenon. The clothing is the same and the posture simply reversed. According to ancient writings (especially Pausanias' Periegesis Hellados), the sculptor made several famous effigies of the goddess, and it is difficult to identify with certitude which of them inspired the copy in the Louvre. Some people think that it is a replica of the Athena Promachos, a colossal bronze statue erected on the Acropolis in Athens in the mid-fifth century BC. Others feel that it echoes the Athena Lemnia, which had been given to Athens by the inhabitants of Lemnos at roughly the same time. Finally, others mention the Athena Areia of Plataea (an acrolith statue) to account for the technique chosen by the copyist, a hypothesis that nevertheless seems to be contradicted by numismatic evidence.