Female assasin fixed for print and on a base 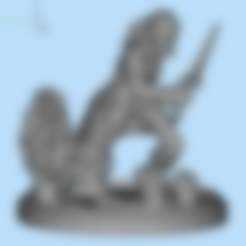 Fix it in Magics and put it on a base. Thanks for models, do it for print myself, but share for others.

This article has multiple issues. Please help improve it or discuss these issues on the talk page. (Learn how and when to remove these template messages)
This article needs additional citations for verification. (June 2016)
This article possibly contains original research. (October 2015)
In role-playing games (RPG), a character class is a job or profession commonly used to differentiate the abilities of different game characters.[1] A character class aggregates several abilities and aptitudes, and may also detail aspects of background and social standing, or impose behavior restrictions.[2] Classes may be considered to represent archetypes,[3] or specific careers.[4] RPG systems that employ character classes often subdivide them into levels of accomplishment, to be attained by players during the course of the game.[3] It is common for a character to remain in the same class for its lifetime; although some games allow characters to change class, or attain multiple classes.[3] Some systems eschew the use of classes and levels entirely;[2] others hybridise them with skill-based systems[5] or emulate them with character templates.[citation needed]

This section does not cite any sources. Please help improve this section by adding citations to reliable sources. Unsourced material may be challenged and removed. (June 2019) (Learn how and when to remove this template message)
Dungeons & Dragons (D&D), the first formalized roleplaying game, introduced the use of classes, and many subsequent games adopted variations of the same idea. These games are sometimes referred to as 'class-based' systems. As well as tabletop games, character classes are found in many role-playing video games and live action role-playing games. Many of the most popular role-playing games, such as D20 system and White Wolf games still use character classes in one way or another. Most games offer additional ways to systematically differentiate characters, such as race, skills, or affiliations.

Class selection screen in Falcon's Eye.
In fantasy games, it is usual to find one (or more) class that excels in combat, several classes (called spell-casters) that are able to perform magic (often different kinds of magic), and classes that deal with stealth.[2] For example, the original Dungeons & Dragons provided a set of three classes:

Thief (renamed "Rogue" in later editions), nimble combatant focused on stealth and social skills, also capable of high-damage special attacks balanced by sub-par resistance to injury
Ranger a ranged weapons specialist[7]
Non-fantasy role-playing games often fill the place of the magic user with scientist classes, the cleric with a medic or similarly supportive role, and the rogue and/or ranger with a explorer.[4] Some also use a psychic powers as a stand in for magic.[8] There are also character classes that combine features of the classes listed above and are frequently called hybrid classes.[3] Some examples include the Bard (a cross between the Thief and Mage with an emphasis on interpersonal skills, mental and visual spells, and supportive magical abilities), or the Paladin (a cross between the Fighter and Cleric with slightly decreased combat skills relative to a fighter but various innate abilities that are used to heal or protect allies and repel and/or smite evil opponents).[citation needed]

Class system variations
Some RPGs feature another variation on the classes mechanic. For example, in Warhammer Fantasy Roleplay, players choose a career.[5] The career works like a class with abilities (known in WFRP as skills and talents) added to the character based on the chose career.[9] However, as the player advances and gains more experience he or she may choose a new career according to a predefined career path or change to a completely different career.[9] WFRP is also notable in that characters are encouraged to roll to determine their starting career which is compensated for by free XP which can be spent on more skills.[10]

A alternative to class-based systems, skill-based systems are designed to give the player a stronger sense of control over how their character develops.[11] In such systems, players can often choose the direction of their characters as they play, usually by assigning points to certain skills.[11] Classless games often provide templates for the player to work from, many of which are based on traditional character classes. Many classless games' settings or rules systems lend themselves to the creation of character following certain archetypal trends.[citation needed] For example, in the role-playing video game Fallout, common character archetypes include the "shooter", "survivalist", "scientist", "smooth talker" and "sneaker", unofficial terms representing various possible means of solving or avoiding conflicts and puzzles in the game.[12] GURPS, which inspired Fallout's system, also used a classless system.[13]

Outside of role-playing games, some other cooperative video games, such as Battlefield 2 and Star Wars Battlefront II use class-based systems to leverage the emphasis they provide on cooperation.[14][15]

Thief (character class)
From Wikipedia, the free encyclopedia
Jump to navigationJump to search

This article possibly contains original research. Please improve it by verifying the claims made and adding inline citations. Statements consisting only of original research should be removed. (April 2018) (Learn how and when to remove this template message)

Thief, taken from the Battle for Wesnoth computer game.
The Thief, Burglar, Scoundrel, or Rogue is a character class in many role-playing games, including Dungeons & Dragons, Final Fantasy, World of Warcraft and many MMORPGs. Thieves are usually stealthy and dexterous characters able to disarm traps, pick locks, spy on foes, and perform backstabs from hiding.

Thieves are usually nimble melee or ranged combatants, and tend to be focused on dodging attacks rather than withstanding damage. They often attack by dual-wielding daggers or with other small one-handed and/or concealable weapons, relying on speed and rapid strikes rather than sheer damage output. Thieves usually work in small groups or guilds. Thieves usually have a stealth ability, allowing them to disappear from sight, often this is combined with attacking an unaware or flanked opponent to inflict high damage. Although thieves may be of any moral alignment (Good, Neutral, or Evil), they are usually either required or pressured by game design to maintain a Chaotic or at least non-Lawful (i.e., Chaotic or Neutral) ethical alignment, with game design pressures including the diminution or loss of their class-specific abilities should their actions render them Lawful or on the Lawful side of a certain point within the Neutral range.

Thieves are usually restricted to the lighter armors, leather and the like. While thieves typically cannot practice magic, they might use scrolls or magic items in some games; if neither options are available, then technical gadgets are used. In most fantasy settings, smaller and more agile fantasy races (like elves, gnomes and hobbits) are particularly suited for the thief class.

Contents
1 Dungeons & Dragons
2 Fire Emblem
3 Ragnarok Online
4 MapleStory
5 Guild Wars 2
6 See also
7 References
8 Further reading
Dungeons & Dragons
Main article: Rogue (Dungeons & Dragons)
Although the thief as an archetype in role-playing games achieved popularity through Dungeons & Dragons, “Thief” in the Dungeons & Dragons game was renamed to “Rogue” in the game's Third Edition, to broaden the class to any highly skilled character[1], with "Thief" as a subclass option in the current edition[2]. Rogues in all editions are capable of doing lots of damage with “sneak attacks”, especially from behind their enemies.

Fire Emblem
In the Fire Emblem games, the thief is the main class able to unlock doors and chests. Their weapon of choice is usually a sword, but in Fire Emblem: Path of Radiance and Fire Emblem: Radiant Dawn, they use knives. In addition to opening doors and chests, they may also steal items from enemy units or lower drawbridges, depending on the game.

Thieves were not able to steal items until Fire Emblem: Genealogy of the Holy War, and were only limited to stealing all of the target's gold on hand by striking them. In Fire Emblem: Thracia 776, thieves were able to steal any item from the enemy, as long as their Speed was greater and their Build was higher than the Weight of the item stolen. Similarly, in Path of Radiance, thieves may steal weapons and items in the same manner as Thracia 776, but only items that are unequipped. Thieves were limited to only being able to steal normal items in the GBA Fire Emblem series.

Thieves may promote to Thief Fighters, Assassins, Tricksters or Rogues, depending on the game, or not promote at all. They are generally offensively weaker than most other classes, but their high speed and skill helps them evade attacks with ease.

In combat, Thieves rely primarily on their agility - they have moderate hit points and their attacks don't deal a lot of damage; however, thanks to their speed & agility, they are able to dodge most enemy attacks and deliver a lot of blows at the same time. While they are able to use some ranged weapons, this is rather rare; a typical Thief will be seen utilising some sort of dagger in combat, as one of the skills available only to this class greatly increases their efficiency with them.

Other abilities of the Thief include stealing items from non-player enemies, becoming invisible for a certain time (although they cannot move while in such a state), throwing rocks and/or sand at enemies, performing a basic poison attack and curing themselves (or other players) of poison. The weapons a thief may equip are bow, one-handed sword, or dagger.

A Thief who has acquired enough experience can become either an Assassin or a Rogue.

MapleStory
In MapleStory, thieves are one of five choices of characters. Like bowmen, they have ranged weapons, a requirement of luck and dexterity, an accuracy increasing skill, and a good balance of HP and MP. Like pirates, they have the option of a ranged weapon or melee weapon, as well as a moderate amount of HP and MP. Like the warrior they can both be equipped with daggers. And like the Magician, they rely greatly on MP, which is consumed quickly.

Rather than stealing, thieves are more based on Ninjas since very few of their attacks are theft related. They are however able to do great amounts of damage rivaling and even surpassing that of Bowmen. This does not go so much for the Bandit choice who must go close up to enemies to attack. Assassins can be a powerful class, as long as they are able to be funded with the right equipment.

Guild Wars 2
A master of stealth and surprise, the Thief in Guild Wars 2 is deadly in single combat—particularly when catching enemies off guard. Thieves compensate for their medium armor and low health by being quick and evasive. They can move through the shadows, vanish into thin air, or steal items from their opponents and use them as weapons.