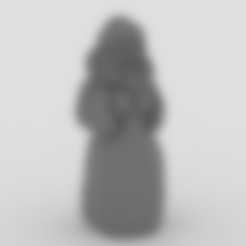 Ded Moroz is depicted as bringing presents to well-mannered children, often delivering them in person on New Year's Eve.

In East Slavic cultures, Ded Moroz is accompanied by Snegurochka (Russian: Снегурочка, Snegurochka; Ukrainian: Снігуронька, Snihurónka; "Snow Maiden"), his granddaughter and helper, who wears long silver-blue robes and a furry cap[2] or a snowflake-like crown.[3] She is a unique attribute of Ded Moroz, since similar characters in other cultures do not have a female companion.[4]

Ded Moroz wears a heel-length fur coat, a semi-round fur hat, and valenki on his feet. He has a long white beard. He walks with a long magic staff[5] and often rides a troika.

The residence of Ded Moroz in Russia is considered to be the town of Veliky Ustyug, Vologda Oblast.[5] The residence of the Belarusian Dzyed Maroz is said to be in Belavezhskaya Pushcha.

Anti-Ded Moroz Soviet propaganda, 1928
The origins of the character of Ded Moroz predates Christianity as a Slavic wizard of winter. According to some sources in Slavic mythology, Ded Moroz, back then also called Morozko or Ded, is a snow demon.[6][7] However, before the Christianity of Rus' the term demon had no negative connotation. Like with many other mythical figures only over time demons were attributed negative characteristics.[8]

Under the influence of Orthodox traditions, the character of Ded Moroz was transformed. Since the 19th century the attributes and legend of Ded Moroz have been shaped by literary influences. The play Snegurochka by Aleksandr Ostrovsky was influential in this respect, as was Rimsky-Korsakov's Snegurochka with libretto based on the play.[5][9] By the end of the 19th century Ded Moroz became a popular character.[4]

A man dressed as Ded Moroz in a blue coat
Following the Russian Revolution, Christmas traditions were actively discouraged because they were considered to be "bourgeois and religious".[10] Similarly, in 1928 Ded Moroz was declared "an ally of the priest and kulak".[11] Nevertheless, the image of Ded Moroz took its current form during Soviet times, becoming the main symbol of the New Year's holiday (Novy God) that replaced Christmas. Some Christmas traditions were revived following the famous letter by Pavel Postyshev, published in Pravda on December 28, 1935.[10] Postyshev believed that the origins of the holiday, which were pre-Christian, were less important than the benefits it could bring to Soviet children.[11]

The western Santa Claus made inroads in the Russian Federation during the "turbulent" 1990s when Western culture increased its penetration into the post-Soviet Russia.[19][20] The resurgence of Russia in the early 21st century brought about a renewed emphasis on the basic Slavic character of Ded Moroz.[21] This included the Russian Federation and subordinate governments sponsoring courses about Ded Moroz every December, with the aim of establishing appropriate Slavic norms for Ded Moroz and Snegurochka ("Snow Maiden" - Ded Moroz' granddaughter) roles for the New Year holiday.[20][22][23] People playing Ded Moroz and Snegurochka now typically make appearances at children's parties during the winter holiday season, distributing presents and fighting off the wicked witch, Baba Yaga, who children are told wants to steal the gifts.[24]

In November and December 2010, Ded Moroz was one of the candidates in the running for consideration as a mascot for the 2014 Winter Olympics in Sochi, Russia.[13]

Variations of Ded Moroz in ethnic minority groups of Russia
Many ethnic minorities have for linguistic reasons other names for Ded Moroz or even have their own culture-equivalent counterparts to Ded Moroz. For example, in Bashkir Ded Moroz is known as Ҡыш бабай (Qïš babay, literally: "Winter Old Man"), in Tatar it has similar spelling Qış Babay (Кыш бабай) with the same meaning. In Nenets he is known as Yamal Iri ("Grandfather of Yamal").[25] The Yakut indigenous people have their own counterpart to Ded Moroz, which is called Chys Khaan ("Master of Cold").[26]

International relations of Ded Moroz
Ded Moroz, and on occasion the Belarus Dzied Maroz, are presented in the media as being in on-going détente with various counterparts from other cultures, such as the Estonian Santa Claus (Jõuluvana or "Old man of Christmas"), the Finnish Santa Claus (Joulupukki or "Yule Goat"), and other Santa Claus, Father Christmas, and Saint Nicholas figures. Some people also say, that Ded Moroz is Santa Claus's grandfather.[27][28][29][30] The détente efforts portrayed have included one-on-one meetings, group meetings and friendly competitions, such as the annual November Santa Claus championships of Celle, Germany.[31][32][33]

The Russian-language website provides "real-time tracking" of Ded Moroz, "news" of Ded Moroz throughout the year, a form to send e-mail to Ded Moroz, photos, videos, streaming audio of Russian songs, poems and verses from children's letters to Ded Moroz, information on Veliky Ustyug in Vologda Oblast (considered to be Ded Moroz's hometown) and opportunities to enter competitions and win prizes.[35]

Regional differences and controversies
There are equivalents of Ded Moroz and Snegurochka all over the former USSR, as well as the countries once in the so-called Eastern bloc and in the former Yugoslavia. After the Dissolution of the Soviet Union, some of these countries made efforts to move away from Soviet and Russian heritage toward their own ancient traditions.

Armenia
The Armenian name for Ded Moroz is Dzmer Pap, literally Grandfather Winter. His loyal granddaughter Dzyunanushik, whose name means Snow Sweetie, or Snow Anush (a popular Armenian female name), is another counterpart of Snegurochka. The tradition was set throughout the times of the Russian Empire after the Russo-Persian War (1826-1828), when Eastern Armenia was joined to Russia according to the 1828 Treaty of Turkmenchay.[36]

For almost 160 years of influence Dzmer Pap and Dzyunanushik have hardly changed their appearance or behavior: they come in red, blue or white winter fur coats and, bringing presents to children, expect them to sing songs or recite poems. They are parts of New Year and Christmas matinées and shows in Armenia. In the recent decades well-off parents have developed a tradition to invite Dzmer Pap and Dzyunanushik to their children.

Azerbaijan
In Azerbaijani, Ded Moroz is known as Şaxta Baba ("Grandfather Frost") and his companion Snegurochka is known as Qar Qızı ("Snow Girl"). In the predominantly Muslim but secular country, where Christians are a very small minority, this tradition remains very popular. Şaxta Baba brings gifts to children at New Year celebrations, however Qar Qızı is rarely present at the festivities.

Belarus
Ded Moroz is Dzied Maroz (Belarusian: "Дзед Мароз") in Belarusian language. He is not a historical folkloric Belarusian character,[37][38] but was a replacement of the local Śviaty Mikałaj – whom Soviet authorities disapproved for its Christian origins.

The official residence of Dzied Maroz in Belarus is declared to be in Bialowieza Forest.[37][38]

Bulgaria
The Bulgarian name of Santa Claus is Дядо Коледа (Dyado Koleda, Grandfather Koleda), with Dyado Mraz (Дядо Мраз, "Grandfather Frost") being a similar Russian-imported character lacking the Christian connotations and thus popular during Communist rule. However, he has been largely forgotten since 1989, when Dyado Koleda again returned as the more popular figure.[39]

In Croatia after the breakup of Yugoslavia, Djed Mraz was labeled communist creation and Djed Božićnjak (literally: "Grandfather Christmas") was introduced. Attempts were made in the mass media and advertising to replace Djed Mraz with Djed Božićnjak. After 1999 the names of Djed Mraz and Djed Božićnjak became more or less synonymous, including in their use on public television. In some families Djed Mraz is still said to brings gifts at New Year.[43] In Croatia, children also get presents on December 6. Due to historical influence of Austrian culture in parts of Croatia, presents are also said to be brought by a traditional figure called Sveti Nikola ("Saint Nicholas") who closely resembles Djed Mraz or Djed Božićnjak, except for the fact that he is accompanied by Krampus who takes misbehaving children away, another character from Central European folklore.[44] In some religious families, little Jesus (Isusek, Mali Isus, Kriskindl) is said to brings gifts at Christmas instead of Djed Božićnjak.[44] Also, in some parts of Dalmatia the gifts are brought by Sveta Lucija ("Saint Lucy")..

Kazakhstan and Kyrgyzstan
Ayaz Ata is the Kazakh and Kyrgyz name for Ded Moroz.

Poland
While there is no traditional analog of Ded Moroz in Polish folklore, there was an attempt to introduce him as Dziadek Mróz during the communist period. Communists, opposed to religion in general, considered Christmas and traditional Święty Mikołaj (Saint Nicholas) "ideologically hostile".[citation needed] Therefore, propaganda attempted to replace him with Dziadek Mróz. Authorities often insisted on using the figure in schools and preschools during celebrations and events for children. This was also supposed to create an illusion of cultural links with the Soviet Union.[45]

Romania
See also: Moș Gerilă
In 1948, after the Communists gained power in Romania, it was decided that Christmas should not be celebrated. December 25 and December 26 became working days and no official celebrations were to be held. As a replacement for Moş Crăciun (Father Christmas), a new character was introduced, Moş Gerilă (literally "Old Man Frosty", a Romanian language adaptation of the Russian Ded Moroz).[46] He was said to bring gifts to children on December 31.

Officially, the New Year's Day celebrations began on 30 December, which was named the Day of the Republic, since it was the day when King Mihai I of Romania abdicated in 1947.

After the Romanian Revolution of 1989, Moş Gerilă lost his influence, being replaced by Moş Crăciun.[47][48]

Sakha Republic
Chys Khan is known as the master of cold, accompanied by the snow maiden Khaarchana.[25]

A man dressed as Dedek Mraz in Slovenia.
In Slovenia, the name Ded Moroz was translated from Russian as Dedek Mraz (literally, "Grandpa Frost"). Dedek Mraz is depicted as a slim man wearing a grey leather coat, which has fur inside and is decorated outside, and a round dormouse fur cap. This version of the character is based on traditional imagery, especially as depicted by Maksim Gaspari in images commissioned in 1952.[49] Although the name was translated literally from the Soviet figure, other names for the character were also considered: Sneženi mož ("the Snow Man") and oca Triglav ("Daddy Triglav").[49] A female figure names babica Zima (Grandma Winter) was also proposed.[49] Initially he was said to live in Siberia, but with the Informbiro crisis and the schism between Yugoslavia and the Soviet Union his home was relocated to Mt. Triglav, Slovenia's (and also Yugoslavia's) highest peak. Public processions featuring the character began in Ljubljana in 1953.[49] The notion of Grandpa Frost was ideologically useful because it served to reorient the December/January holidays away from religion (Saint Nicholas Day and Christmas) and towards the secular New Year.[49] After the ousting of Communism at the beginning of the 1990s, two other "good old men" (as they are currently styled in Slovenian) reappeared in public: Miklavž ("Saint Nicholas") is said to bring presents on December 6, and Božiček ("Christmas man"; usually depicted as Santa Claus) on Christmas Eve. St. Nicholas has had a strong traditional presence in Slovenian ethnic territory and his feast day remained celebrated in family circles throughout the Communist period. Until the late 1940s it was also said in some areas of Slovenia that Christkind (called Jezušček ("little Jesus") or Božiček) brought gifts on Christmas Eve. Slovenian families have different preferences regarding their gift-giver of choice, according to political or religious persuasion. Slovenian popular culture depicts Grandpa Frost, Saint Nicholas and Santa Claus as friends[50][51] and has also started blending attributes of the characters, for example, mention of Santa's reindeer is sometimes mingled into the Grandpa Frost narrative at public appearances. Due to his non-religious character and strong institutionalization, Grandpa Frost continues to retain a public presence.[52]