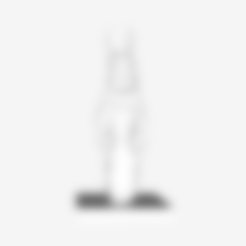 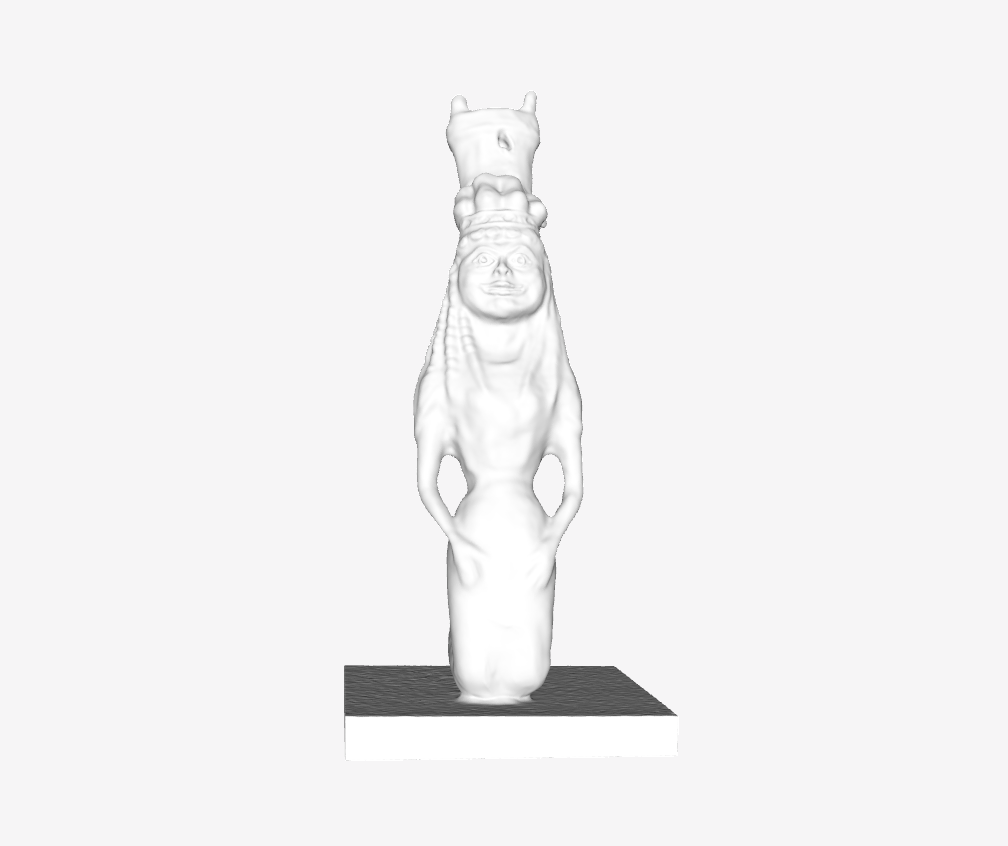 This kneeling Gorgon is of exceptional size. The figure was part of the decoration of a bronze trivet, of a type invented in the Near East and copied in Greece, used to support a movable cauldron. The figure was probably made in eastern Greece in the first half of the 6th century BC. It is a forerunner of the Laconian type of Gorgon figure and illustrates the "Ionian" influence on Laconian craftsmen in the Archaic period.

This impressive bronze statuette entered the Louvre in 1883. It was reportedly found in the sea near the island of Rhodes, which partially explains the corroded appearance of the surface. The lower part features a kneeling Gorgon with its hands on its thighs. Its wide, chubby face is framed by heavy beaded locks of hair and a short-cropped beard, heightening the traditionally fearsome appearance of this monster. The Gorgon sticks out its tongue, revealing two small fangs in the corners of its mouth. Its large, wide-open eyes were originally incrusted with a white material, ivory or bone, that is partially preserved on the iris of the right eye.

Around its head the monster wears a headband on which a lion's paw rests. Two thick rods (and probably a third, of which only broken-off traces remain) were fixed on to the top of this paw by a casting technique whereby the pre-forged rods were inserted into the wax model so as to fix the object to its support. This fixing system is completed on the back of the paw by a slightly curving ribbon extending the two rods into a Y shape. On one of the rods, a right-angled fragment corresponds to the tip of a prop extending to behind the Gorgon's head above the headband. This complex arrangement indicates that the kneeling figure decorated a type of Near Eastern trivet, imitating wickerwork, that had been imported to and copied in Greece. The size of this trivet would have been exceptional, as is the motif of the lion's paw resting on the kneeling Gorgon's head. These trivets were generally used to support movable cauldrons, which were decorated with various sculpted motifs, particularly griffin protomai.

The origins of this work have generated much debate, but it is today agreed that it was produced in Asia Minor in the first half of the 6th century BC. Its attribution to a workshop in eastern Greece is based on similarities in the facial features to those of the Laconian-type gorgoneion, whose direct antecedents date back to the late 7th century BC in Rhodes (modeled vases) and Samos (ivory figurines). The Louvre statuette illustrates the "Ionian" influence exercised by the artists of eastern Greece on the workshops of Laconia (southern Peloponnese). The Laconian type, deriving from Asia Minor, reflects the primitive nature of the Gorgon figure. Huge bulging eyes, a flat nose, and small horns are characteristic facial features of these monsters intended to to terrify the observer. This type differs from one that spread throughout Corinth in the second half of the 6th century, which featured a not particularly frightening hexagonal face with small eyes and a large mouth.